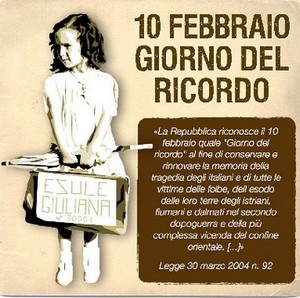 I have just received the suggestion from our Grand Master Bro. Marco Galeazzi to write some reflections on the Italian Day of Remembrance of the victims of the “Foibe” (deep sinkholes in the Istrian lands). I am grateful to him for the thought and for the trust, which serve me above all to break the painful secrecy of my personal memories.

It was an institutive law, a duty, whose aim was to remedy in a small part the moral and historical debt of the Motherland towards many Italian citizens who, at the end of the unfortunate Second World War – which for Trieste and Istria lasted not six, but fifteen years – have paid a very high bill in goods, affections and blood. One could do or resume studies and reflections on a thousand things: on the great and small politics, on the so-called “Drang nach Westen” which, from the “Placito del Risano” document written in year 804 A.D., is a historical reality in these lands, and the exodus of peoples of Eastern Europe, alternately towards east or west, was the rule rather than the exception; the three hundred thousand Istrians and Dalmatians who were forced to leave should be compared to the three million Sudeten Germans displaced from Czechoslovakia,  or compared to Poland, repeatedly displaced hundreds of kilometers from its original territory, then abolished as a country and again reconstituted. This is historya  and politics at the same time; better, this is history driven by politics.

Nevertheless, the feelings of being uprooted from one’s homeland, from the places of childhood and youth, from the grave of one’s family – that was a value when the dead were honored and not disposed of – have a completely different nature. But more than the attachment to one’s possessions, to the fields cultivated for generations, to the houses built with one’s own hands, the most painful deprivation was the sudden destruction of the social fabric, with roles, friendships, and personal relationships, severed and missing. Communities wiped out and scattered in refugee camps, and then around Italy, Canada or Australia: exiles, naked and raw.

But from the point of view of Freemasons, what are the elements to be placed at the center of our reflection? Certainly, we should ask ourselves “why?”. Too banal to speak of good or bad feelings; any attribution of blame or merit is useless, also because history is not judged, but studied. And the first observation is that history is never over; the retrospective glance makes sense only if it serves to grasp the signs of the future: of a tomorrow made up of reasonable possibilities rather than comfortable and fearful presumptions.

It must have been the fault of cultural differences, of exasperated nationalisms, which from the first half of the nineteenth century also animated the peoples of this great area, of political ideologies, which proved absurd in a few decades, of the desire for domination and possession that has never been failure; however, the inability to recognize oneself humanly and to respect the reasons for the life of others was totally manifested.

In reality, this reflection in others is at the heart of our initiatory path, and consists in reading our own humanity in others; but we must frankly tell ourselves that – beyond the “it would be nice if” – it is a rare sensitivity, which must be lovingly and intelligently cultivated and concerns a small minority of people, who are neither the best nor better men, but simply “more men “. A “race of the spirit” – today as yesterday – more necessary than ever.