CHRISTMAS OF ROME AND DECLINE OF THE EUROPEAN “PAX” 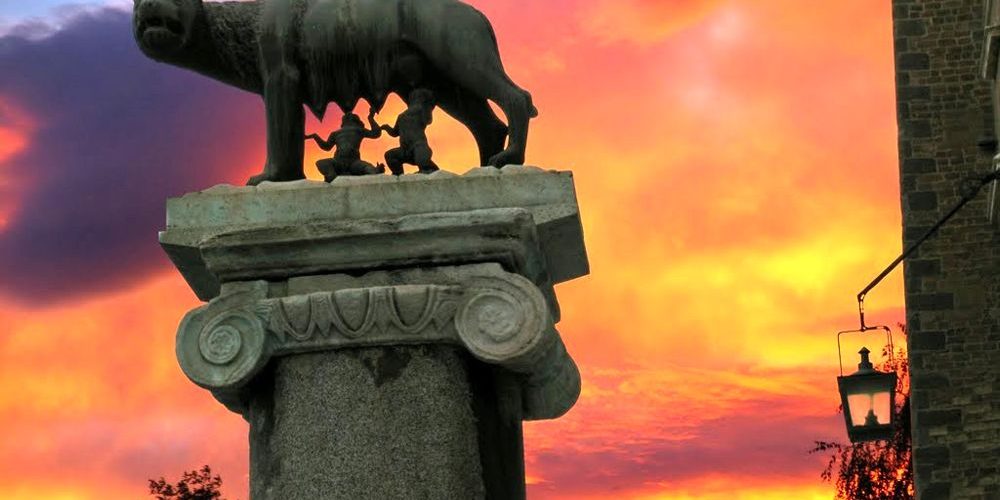 On 21st April, the clash of Russian tanks, which entered Ukraine, overshadowed the celebration of the 2775th Christmas in Rome. Two thousand seven hundred and seventy-five years are really a long time, but they are not too long for a city that likes to define itself as “eternal”. Historical research has not provided us with reliable sources to determine the birth of the city in all its details. We know for sure that the kings of Rome were not just seven and it is clear that some of them were not real Romans. The scholar Varro commissioned the astrologer and mathematician Lucio Tarunzio da Fermo to define the fateful date. He went to work and established, with astral (or abstruse?) calculations that Rome was founded by Romulus on April 9, 753 BC. To respect popular traditions, this date was moved to April 21st. Should we trust Lucio Tarunzio? I would say yes, since official science wanted to name a large lunar crater, Taruntius, after him. In the epoch in which we live, marked by pacifist ideology, by “cancel culture”, by the continuous desecration of Western civilization, by the incessant whining about its deadly sins (wars, slavery, supremacism) we must have the courage of a female salmon to go upstream in the opposite direction. We liberal Freemasons, possess this non-conformist spirit.

Universality may be a difficult dream for us to achieve, but it will never be the shield to protect us from the risks resulting from assuming the ethical and moral responsibilities that belong to those who want to remain consistent with their ideals. The history of that people, born from the more or less spontaneous fusion of different Italic peoples, was able to realize the dream of a republic, then transformed into an empire. Rome was able to unite the vast regions surrounding the Mediterranean, without abjuring local traditions, respecting different languages ​​and religions. The Roman Empire, although born of fierce battles and internal wars, was the creator of the “pax latina”, marked by ancient Greek culture, respect for tradition and cult of a patriotic sentiment that went beyond the limits of deleterious nationalisms and localisms. Becoming a “Roman citizen” was an honour for anyone who recognized themselves in those values.

When we talk about Rome, not surprisingly, high-sounding nouns are used: greatness, splendour, power, civilization, insuperability. Is everything gold all that shines? Many in Italy are conditioned by the aversion to the rhetoric of the fascist regime which abused the terms and symbols of Romanism: it is wrong to inform our opinion about that centuries-old historical period which was fundamental to building today’s Europe and for the whole of the western civilization, basing on the assumption that a dictatorship that lasted twenty years and ended up in the abyss of an absurd war and an unacceptable alliance, has misinterpreted the true spirit of Rome. In some superficial cartoonist American filmography, the ancient Romans are portrayed as protonazi sadists who torture poor slaves and rejoice by making innocent gladiators with good hearts shed blood. Fortunately, there are intellectuals and historians, from all eras, who have opinions clearly opposed to this type of reading of Roman times.

I cite some examples. I start with Horace, cantor of the greatness of Rome. In the second Epistle with a sublime synthesis, he explains what is the source of Romanity: “Graecia capta, ferum victorem cepit” (The conquered Greece captured the ferocious winner). The initial ferocity that marked the birth of Rome was undoubtedly a negative force, but it must be recognized that it was transformed into positive energy through the acceptance of the dictates of classical Greek culture. The Hellenic dream of exporting its highly advanced cultural model was carried out by Rome, after the failed attempt by the Macedonian Alexander the Great, “almost” Greek but too young and unfortunate to transform his daring undertaking to conquer the world into a stable form of government. Rome understood on its own skin that longing for “the man alone in command” would be a tacky mistake. First of all it was necessary to build a solid organization of the state with all the necessary guarantees to avoid dangerous slips towards the dictatorship. “Si vis pacem para bellum” wrote the late Roman expert in military art Vegezio, collecting the experience of long centuries of Roman superiority in the art of war. The second element of the greatness of Rome was, in fact, that of understanding that to obtain peace it was necessary to make the bullies on duty understand that one was ready to face and beat them.

The English historian Edward Gibbon (1737-1794), initiated into Freemasonry and author of the fundamental text “Decline and fall of the Roman Empire”, understood the ancient Roman cuture much more than others. His aversion to dictatorships and tyrants’ thirst for power is well known. In fact, he believed that aspiring to power was a negative, imperious and selfish drive, as it was founded on the pride of “one man” who demands the submission of the multitude. A very current reflection. I report this prologue of him to the chapters that deal with the period of the Roman Empire that preceded the beginning of the decline:

“In the second century of the Christian Era, the Roman Empire comprised the most beautiful part of the Earth, and the most civilized portion of mankind. Valour, discipline, and ancient fame defended the frontiers of that vast monarchy. The gentle but powerful influence of laws and customs had gradually established the union of the provinces, whose peaceful inhabitants enjoyed and abused the advantages that arise from wealth and luxury. The image of a free constitution was still preserved with decent respect; and sovereign authority apparently resided in the Roman Senate, which entrusted the entire executive power of the government to the emperors. In the happy course of more than eighty years, public administration was governed by the virtue and skill of Nerva, Traiano, Adriano, and the two Antonines ”.

Gibbon was the first English historian to admit that without his rule over much of the British Isle, London would never have become the capital of a new empire. He added that he admired the wisdom of the Romans who, although annoyed by the frequent incursions of the peoples who lived north of Hadrian’s Wall, first of all the Caledonians, did not persist in fighting them in order to eliminate them from the face of the Earth.

The latest quotes concern the famous English historian Mary Beard, a lecturer at Cambridge and awarded with the highest British honour. Recently in an interview with Dario Ronzoni from “LINKIESTA”, regarding the proposal to remove the statue of Cecil Rhodes from the University of Oxford, she said: “This is the very meaning of antiquity: talking about us through a distorted mirror. The classical world is a metaphor. A point of reference which overlaps and from which we detach ourselves. A method to test one’s values ​​and define one’s choices. I am against the removal of the Cecil Rhodes statue…. philanthropist (but slaver) located in Oxford. Keeping the wrong symbols standing is also a way of reminding us of how opinions change over time. And that we too, one day, could be placed in the wrong part of history “…

It is therefore not surprising that, in his essay “SPQR”, she writes in the conclusions: “We would do the Romans a disservice if we considered them heroes, just as we would do it by demonizing them. But we do harm to ourselves if we don’t learn to take them seriously, and if we interrupt the long dialogue we have had with them. This book, I hope, is not simply a history of ancient Rome, but an integral part of this conversation with the Senate and the People of Rome: SPQR “.

Today Europe risks interrupting a “pax” that lasted over seventy years. The lesson that comes to us from the history of Rome should make those who have broken this enchantment, cause their pride and selfishness, reflect.

The Grand Orator of the Grand Liberal Lodge of Italy