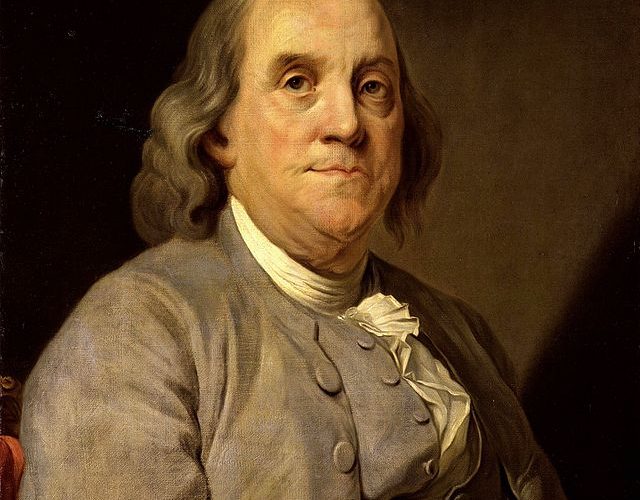 Benjamin Franklin was a multifaceted man capable of emerging in many fields of human knowledge: statesman, diplomat, man of letters, scientist, publisher and typographer, essayist, founder of the prestigious University of Pennsylvania. We remember him above all for having been one of the fathers of the greatest liberal democracy in the world, the United States of America. He was among those who wrote the Declaration of Independence of 1706, a fundamental document for the most powerful nation in the world.

He signed it with Adams, Livingston and Sherman stating, “We really have to stick together or, in all likelihood, we will all be hanged separately.” He was certainly not a lover of war although the conquest of independence had cost the sacrifice of many human lives in belligerent acts. In fact he wrote: “There has never been a good war or a bad peace.” The good of peace, a universal ideal for those who believe in brotherhood among all peoples, must arise from the sacred respect for the principles of freedom and equality.

He was able to borrow Christian thought with the Enlightenment philosophy that was awakening the conscience of the oppressed: “Love your neighbor but do not lower your defenses” was a categorical imperative for him.

He fought two human vices: sloth and laziness, in particular mental laziness with these words: “Those who live hoping die on an empty stomach” or “Many people die at twenty-five and are not buried until they turn seventy-five“. She manifested a real cult of learning, knowledge and wisdom. On the first he was categorical: “Being ignorant is not so much a shame as not being willing to learn” and to reinforce this concept “Whoever teaches himself has an idiot for his teacher.” On the second he expressed himself: “Do not hide your talents, they were given to you to be used. What is a sundial in the shade? “. On the third he was even more uncompromising: “Wise men don’t need suggestions. Fools don’t take suggestions into account ”. Finally, he believed in the importance of the virtue of silence. He wrote of himself: “Considering that, in conversation, we learn more with the use of the ears than we learn with that of the tongue, I gave silence the second place among the virtues I intended to practice“.

Franklin was also a keen connoisseur of himself and his limitations. He invited everyone to be the first to laugh at themselves, before others laughed at them. Self-irony is an indispensable step for an essay to consider himself intelligent. He was consistent throughout his life in the duty to fight against tyrants: “To rebel against tyrants means to obey God“. A current warning, like the sentence quoted at the beginning of this article. It is sad today to see so many people indifferent to the crimes committed by invading tyrants, by satraps acclaimed by cheering crowds, by maddened theocrats who impose the burqa by law. The same individuals show themselves sensitive only to the nonsense spread via the Web and to anti-American conspiracy theories. This is how the world goes, perhaps oblivious to its great achievements of civilization.

The Grand Orator of the GLLI

Note: Franklin was initiated into Freemasonry in 1731 in Lodge “Saint John” in Philadelphia. He participated in 1760, as Grand Master of the Order of his home state, in the works of the Grand Lodge of England, founded in 1717. He was the supporter of Voltaire’s initiation, which took place in 1778 in Paris, supporting the old philosopher by the arm as he accompanied him to the altar for the ceremony. As an editor he first published the Anderson’s Constitutions in America.