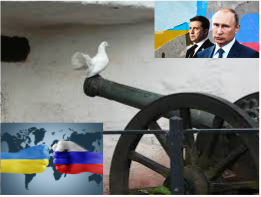 Is peace in itself an absolute value to be pursued at any cost? And does war, as a result, really embody absolute evil? Are War and Peace opposite concepts or do they represent the two sides of the same coin or the “natural human condition” well represented by the proverbial “Homo homini lupus” by the playwright Plautus, later taken up by the philosopher Hobbes?

According to some, peace must be pursued at any cost as every war, however successful, leaves behind a trail of death, poverty and despair. The intention expressed by France and Great Britain to intervene in 1939 against the Nazi invaders also filled the streets with pacifists intent on stopping the war machine. If they had grasped this “noble” objective, our Europe would have become an immense barracks inhabited by bloody SS, “cleansed” of the “Jewish scum”, with the “inferior” Slavs forced to the role of slaves and the “fearful” Italians to that of cheerful drivers and tour guides of the blond new owners. Cataldo Intrieri, expert jurist, on INKIESTA.IT, writes about the ongoing war in Ukraine and the stance opposed to supporting the resistance also by supplying weapons: “Those people who claim that Putin is as guilty as NATO and the United States in causing  the Ukrainian crisis  don’t  have learned anything from the Second World War. Even then the democratic societies did not want to see and adopted a series of compromises that turned out to be catastrophic … moreover, I have no memory of major manifestations of the opposite sign, from Czechoslovakia in ’68 to Poland in ’70 and 81, up to Kabul in ’79. Today we are facing the paradox of the streets that rail against NATO, which has never invaded any country, and overlook Russian aggression “.

We Freemasons, inspired by the universal values of equality and freedom, pursue the dream of a Society pervaded by a feeling of fraternity and consistent with the sacred principles of freedom and justice, indispensable for guaranteeing peace and well-being for all. In Ukraine today nothing of what we believe will ever be realized if the expansionist ambition of an autocrat is not stopped. If he continues to bomb hospitals and schools and to machine-gun columns of fleeing elderly people and women, he will acquire the right to transform himself into the new dictator of the 21st century’s world, worthy of his 20th century predecessors.

As I write this, on the sixteenth day of the war, columns of trucks carrying Russian troops attempt to encircle Kiev, a martyr city of World War II. There is a real risk that the infamous Babij Jar cliff will once again turn into a place of absolute evil, or rather a cursed springboard from which to throw into the void innocent citizens, as did both the Nazis and the Soviet Communists.

While the “nuclear danger”, the biography of the Ukrainian President and the risk inherent in the project to impose a “no-fly zone” are discussed in the media salons, long columns of tanks are heading west towards the borders of peaceful Moldova, not far from our allies Poland and Romania, invaded by millions of fleeing refugees.

We Freemasons want “universal peace”, but we cannot accept to bow to the despots of the moment. If Putin conquers Ukraine, no one will be able to stop him anymore, he will bet decisively on the Baltic republics that surround his “enclave” of Kaliningrad. Following his example, his companion China will “take back” the peaceful, democratic and productive island of Taiwan, North Korea will conglobe South Korea and so on.

Putin is not a mad psychopath like Hitler. He is a cold and skilled chess player who grew up in the KGB school. He knows well our “weaknesses” and uses them in his favour.

He is aware that even in a “total” war, he would not only have the worst but would also be damned by history, as an exterminator of millions of innocent people. His atomic threats are a bluff.

In a Europe, increasingly weak and decadent, we are left with only Culture (even that threatened by the horde of pseudo-progressives who want to rewrite history) and Freedom of thought. These are truly two formidable weapons. Seneca wrote: “Qui timetur, timet. Nemo potuit terribilis esse secure “(transl.” He who is feared, fears. He who is the object of the fear of others cannot feel safe”).

Today, we must work for peace at all costs, but for an honourable peace founded on justice. If we Italians paid the price for our support for Nazi Germany in 1946 by yielding large parts of the country to Slovenia, Croatia and France (nations not immune from criticism for their conduct in the last conflict), the Ukrainians will also have to agree to yield. parts of their country where there is a Russian-speaking majority, but their full right to live in a free and independent nation must be respected, without any restrictions whatsoever. Just as Italy was not only “a geographical expression” (unacceptable statement by Metternich), so is not Ukraine which has a centuries-old history and identity and does not accept the Pan-Slavist hegemony of the Russians. The historian Polybius, referring to a just and honorable peace, said that it was undoubtedly a beautiful and advantageous thing. However, he added: “A peace born of cowardice and dishonour is the most infamous and harmful thing“.  History teaches us that a “bad” peace generates hatred, frustrations and new wars.

For us Freemasons, the repudiation of war as a habitual tool for achieving political goals is an attitude inherent in our ideals, but if others question the universal values ​​we believe in, that is respect of Human Rights and fundamental Freedoms sanctioned by the liberal Constitutions, we are ready for any sacrifice to defend them. Therefore, the initiative taken by our Grand Master to offer concrete economic aid to the suffering Ukrainian population constitutes a highly significant act of love and brotherhood between peoples and a signal that liberal and adogmatic Freemasonry will never bow to any dictatorship. Today we can only help our Ukrainian brothers in this way. May God grant that the future should not call us to other actions.

J.F. Kennedy, in an unforgettable speech given in front of the Assembly of the O.N.U., stated: “Humanity must end war or war will end humanity“. Let us hope that Putin does not depart from the path traced by the great American President, who said that  not for himself or in the name of the American people, but for the whole civilized world.

We want peace but not a peace which, as Spengler wrote with bitter cynicism in “The Fall of the West”, is the continuation of the war by other means.

(The Grand Orator of The Grand Liberal Lodge Of Italy)